ARE YOU READY FOR A GOOD TIME!

Over 21 years touring Australia and the World ACCA DACCA have survived the test of time and are one of Australia’s and the worlds longest running Best known and loved AC/DC Shows, where others have fallen short. “Approved by AC/DC Themselves ”

Mark Thomas Smith , Mark was recruited as our Brian , Mark is Theatre trained vocalist and holds his own with the best in this country ,Our newest member however proving invaluable as this Monmouth show progresses.

Jesse Attard “Larry’s Son” Performs the Angus role to a tee not only is Jess highly acclaimed Guitarist
Jess is a hyperactive non stop little firecracker much like his alter ego.

QUOTE
“Where most AC DC tributes I’ve seen have an Angus STATIC and looking like a light post Jess rules the stage and god help anyone who is unfortunate enough not to get out of his way in time. “END QUOTE ”
Andre Tassart” Rock Hard Magazine Netherlands.

Acca dacca have been belting out all of your favourite AC/DC tunes since 2000, with vocalist Larry Attard
having supported and run in the same circles as an up and coming AC/DC in their early years with the occasional drinking seash with Bon himself at The Victory Hotel Sydney in mid 70’s.

Huge production, a wall of Marshall’s and a state of the art light rig ad to this outstanding world touring Rock n Roll Machine that is ACCA DACCA.
Show.
Where the others say they are the best ACCA DACCA Let you be the Judge

Such is it with The AC/DC Story, a interactive THEATRE ONLY performance that documents the life and times of one of Australia’s finest ever musical exports.

Taking you on a journey from the humble beginnings of the legendary band through the Bon Scott era and the fallout from his death, through to the many highlights with Brian Johnson at the helm, The AC/DC Story succeeds where others have failed through the use of visual mediums such as film clips, interviews, and rare photographs and combines them with a live performance from ACCA- DACCA in selected increments, performing songs from each album and adding an authenticity to the show that takes you back to the days when this cheeky group of Aussie underdogs defied all odds to reach the summit of rock and roll.

It is a show that will inform and entertain, with the famous bells from ‘Hells Bells’ and the cannons from ‘For Those About to Rock’ making a welcome return. It is an all encompassing spectacular that tells the story of AC/DC with music and allows you to actually feel and enjoy the journey from a unique and rewarding perspective.

You’ll Laugh You’ll Cry You’ll ROCK! But one things for certain YOU can’t afford to miss The AC DC Story. 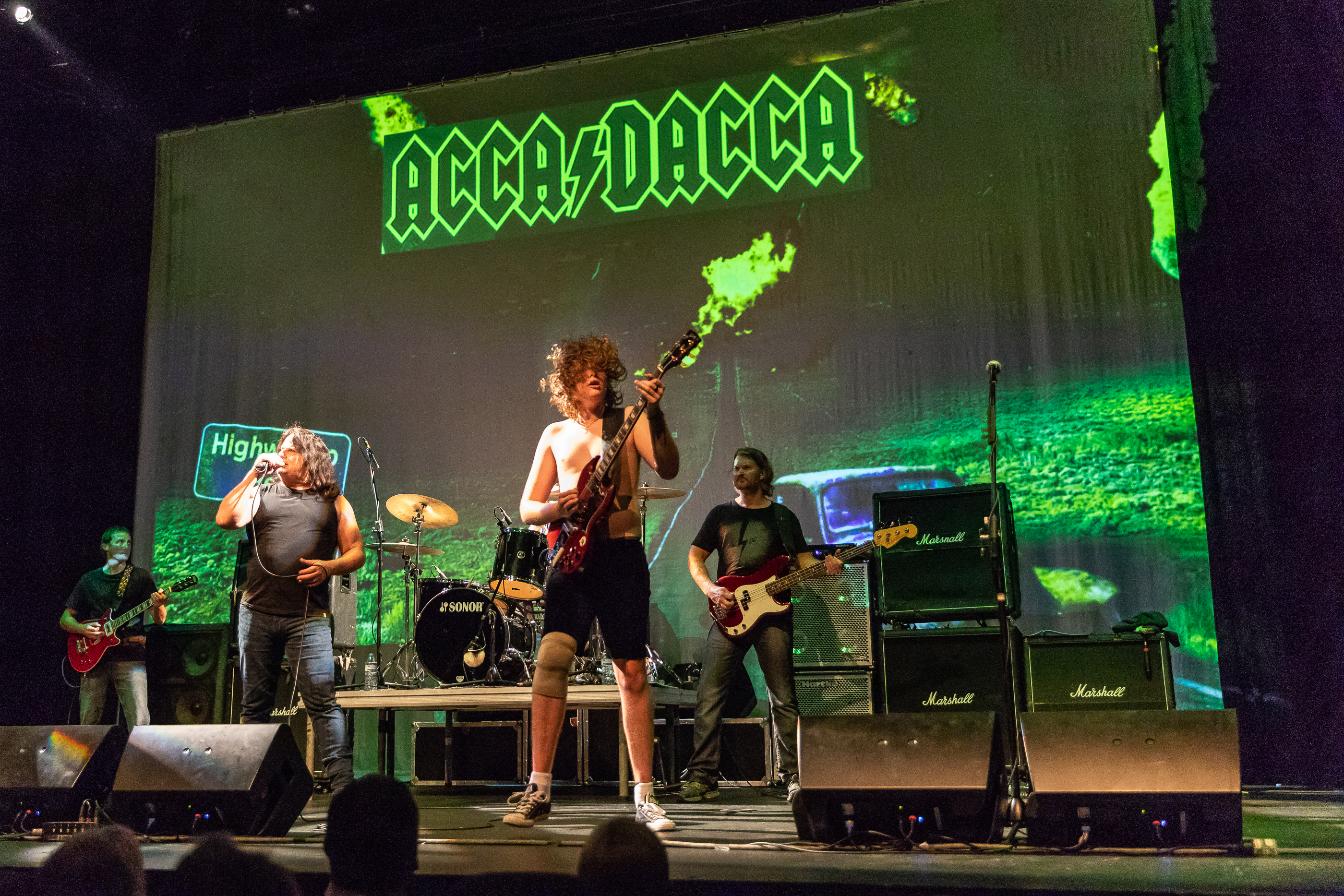 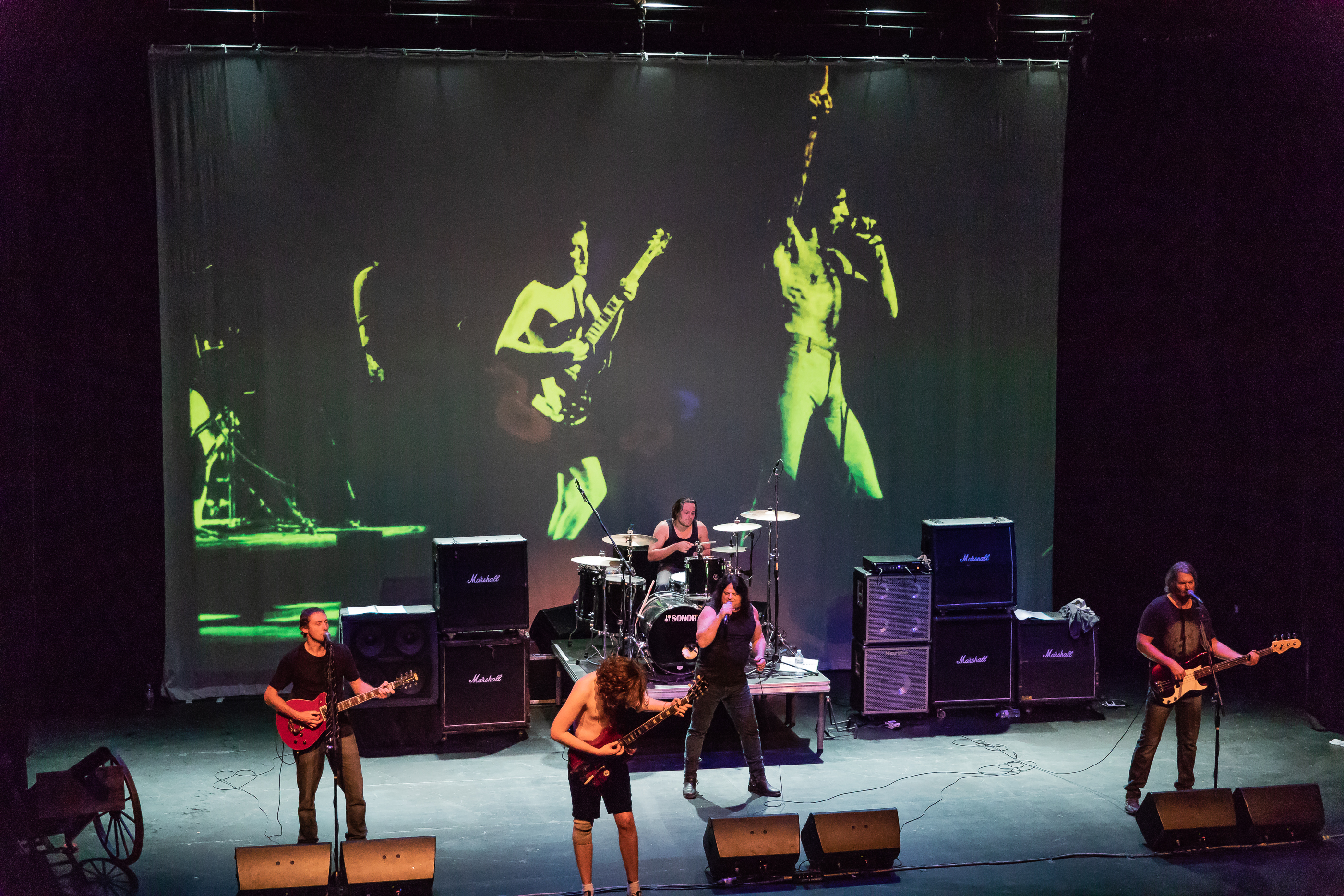 ACCA/DACCA was formed in Brisbane Australia in 2000 by Larry Attard [our Bon/Brian] . Larry grew up with and had a great deal of admiration for
AC/DC from their very beginning. As its turned out, Larry’s voice is extremely similar to Bon’s (as quoted in Australasian music magazines) and he belts out the late great front man’s material with ease. At one stage in the early 80’s it was thought Angus and Malcolm Young (AC/DC) were considering Larry for the front man’s job after Bon’s untimely passing, as both Malcolm and Angus were spotted firmly fixed on Larry at a SNAKE gig in Sydney. SNAKE is Larry’s “originals” band and word had obviously reached Malcolm and Angus Young about the uncanny similarity of Larry’s and Bon’s voices . Larry was then called into Alberts studios Sydney to meet with George Young and Harry Vander, however and at the end of the day, the position was given to Brian Johnson.

If you ask Larry Attard he will tell you that forming a band such as ACCA DACCA was the last thing on his mind, nonetheless and with masterful persuasion from fellow muso’s and interested promoters, the decision was made to give it a try , and so was conceived, with jaw dropping results, ACCA DACCA ! 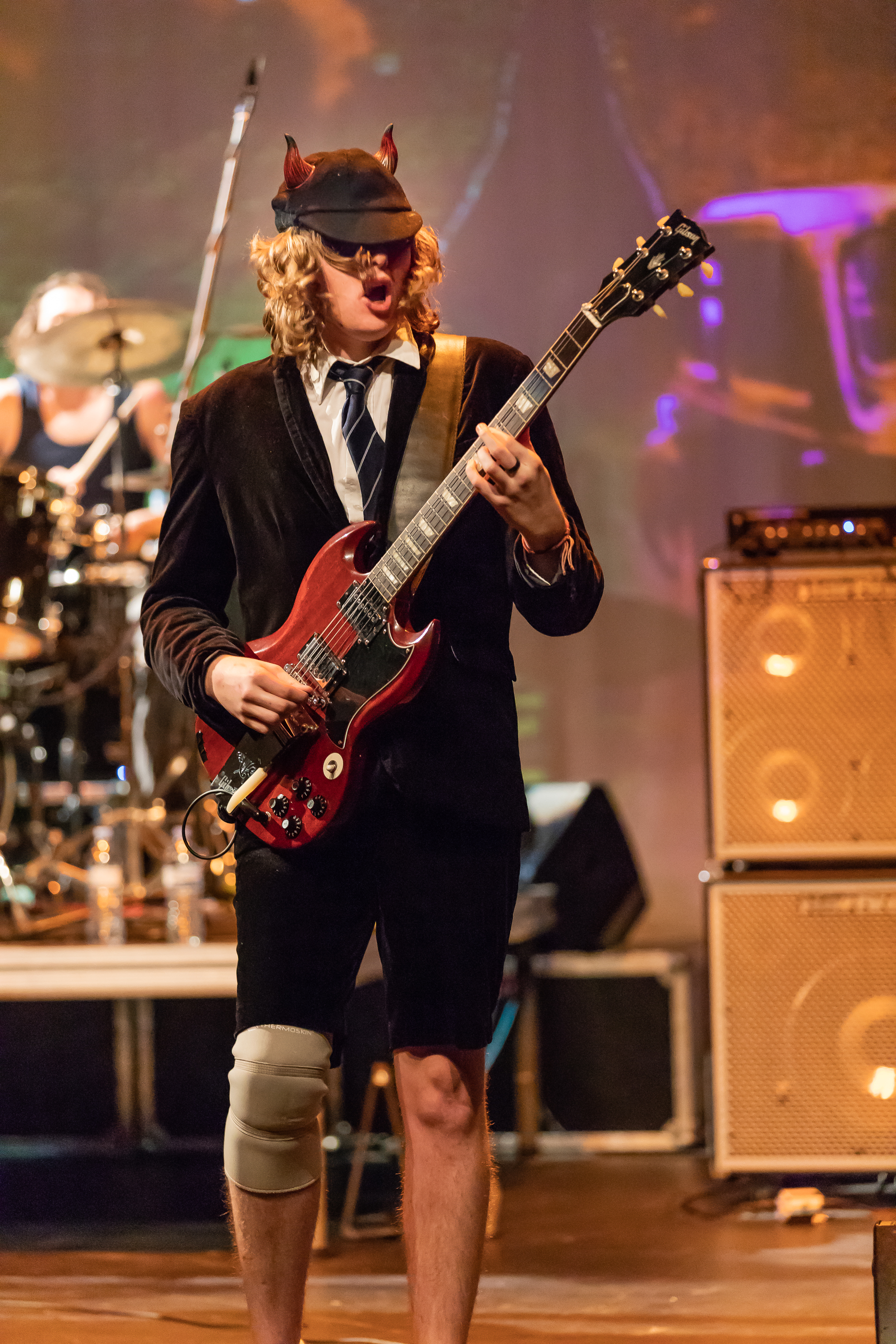 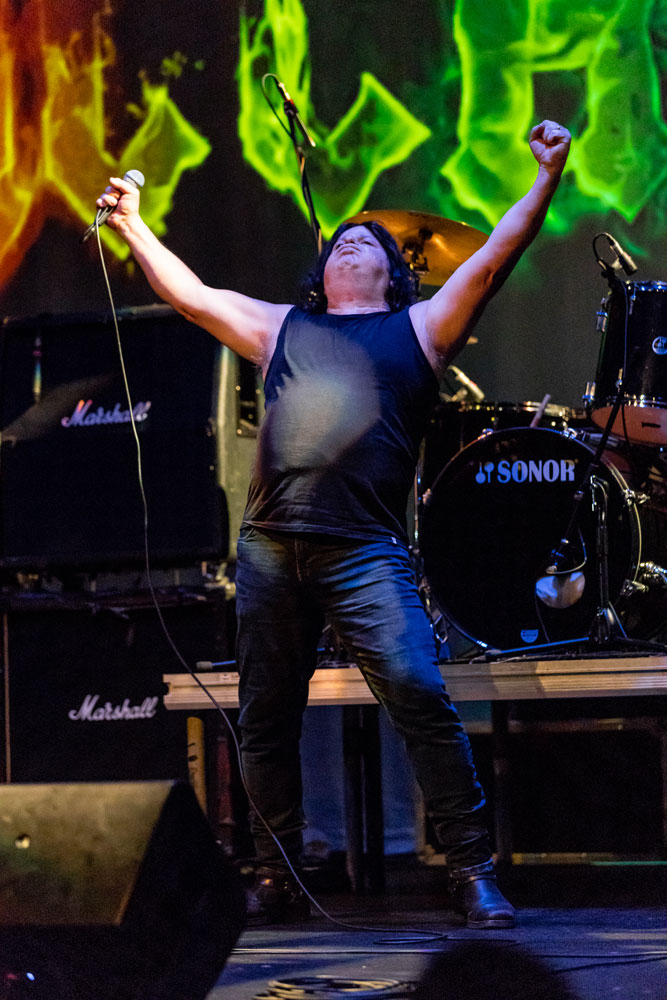 INTERVIEW WITH LARRY FROM ACCA DACCA

No mate, it’s not a tribute show,” sighed Accadacca frontman Larry Attard. “It’s more like a homage to the legacy and the memory of AC/DC from their early years right through to Bon Scott’s death and the emergence of Brian Johnson before he was forced from the band due to health issues. We prefer to think of the show as celebrating the life and the music of one of Australia’s greatest ever bands.”

Accadacca have toured both internationally and through Australia since Attard formed the band in 2000. Rather than taking advantage of a path already forged by AC/DC, Accadacca were aiming to fill a growing void within the Australian music industry by recreating a period of music that will forever define rock and roll in this country.
“My originals band Snake had recently broken up and I wasn’t ready to hang up the microphone,” Attard continued.

“Snake had supported AC/DC on a couple of occasions and there was a fleeting period where discussions were held involving myself, Snake and AC/DC before Brian was named as Bon’s successor. I was sick of people telling me how much I sounded like Bon when I sang so I decided to form the band to provide an outlet to breathe life into the juggernaut that is AC/DC. Years later when Angus Young was interviewed in Germany and asked which cover band stood out from the others he quickly replied ‘if you can’t see the real thing, the next best thing is Accadacca’ which sort of justified things for me.”

Despite going through inevitable line-up changes, Attard and son Jesse (lead guitar) have been the two constants in the band, with Jesse having first operated lights for the band while his Father belted out the tunes when he was just six years old. From there he progressed to drums before a seemingly endless run of trouble with the lead guitarists performing the Angus role in the band forced him to pick up the guitar.

“Jesse has been a part of Accadacca before he got his first pubic hair,” Larry laughed. “We took him on the road when he was just a cheeky little shit and along the way he picked things up that put him in good stead for the future. I remember when he finally had enough of the revolving door of Angus’s he locked himself in his room with AC/DC DVD’s and CD’s and learned how to play the songs from there. A couple of weeks later he was ready to perform and has been Angus ever since. He’s still a cheeky little shit but we’ve all learned to tune out (laughs).”
While still enjoying the nightly thrill of performing AC/DC’S hits, early last year Larry decided it was no longer enough to play to pub crowds and outdoor stages. The fans were hungry for more than music – they wanted to know the behind the scenes moments and decisions that helped shape AC/DC.

“I started toying with the idea of moving to a bigger stage and using a big screen behind the band to show rare photos, interviews, and graphics, punctuated by Accadacca performing hits from various key stages of AC/DC’s career,” he offered. “That grew to include a voice-over commentary and archival footage plus the addition of cannons during ‘For Those About to Rock’ and a live bagpipe player for the classic hit ‘It’s A Long Way to the Top’.” “With this production, I wanted to take the audience through the history of AC/DC. I wanted fans to know the stories behind the songs and things like album covers by sharing interviews with the band from the early days and recounting stories of debauchery and extravagance from the bands perspective. Of course with Bon leaving us in 1980 we have had to split the show into two sections focussing on AC/DC with Bon and then their career afterward with Brian which is separated by a short interval where the audience can catch their breath.”

Spanning over three hours, the AC/DC Story doesn’t just bombard you with hit after hit, it more focuses on the journey of the band from humble beginnings to their current standing among the world’s elite bands told through the words and images of what was a group of young, inexperienced musicians who were at times out of their depth but had a tenacityand cheeky flippancy that forced the world to take notice.

“We feel the whole story of AC/DC needed to be told,” Larry said proudly, “and it needed to be told through the memories and images of the band themselves. We owe – in fact the whole music world owes a debt of gratitude to every member to have passed through AC/DC and with the AC/DC story we hope the fans can not only learn from the experience but can also understand the personalities that pioneered a whole genre of music.”